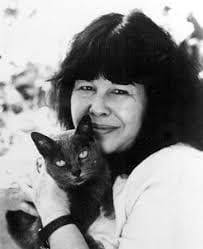 Barbie Doll is her most famous piece-of-work!

For the Young Who Want To
BY MARGE PIERCY

Talent is what they say
you have after the novel
is published and favorably
reviewed. Beforehand what
you have is a tedious
delusion, a hobby like knitting.

Work is what you have done
after the play is produced
and the audience claps.
Before that friends keep asking
when you are planning to go
out and get a job.

Genius is what they know you
had after the third volume
of remarkable poems. Earlier
they accuse you of withdrawing,
ask why you don’t have a baby,
call you a bum.

The reason people want M.F.A.’s,
take workshops with fancy names
when all you can really
learn is a few techniques,
typing instructions and some-
body else’s mannerisms

is that every artist lacks
a license to hang on the wall
like your optician, your vet
proving you may be a clumsy sadist
whose fillings fall into the stew
but you’re certified a dentist.

The real writer is one
who really writes. Talent
is an invention like phlogiston
after the fact of fire.
Work is its own cure. You have to
like it better than being loved.

In her writing, she deals with feminism and deals with social concerns through her writing. She also speaks grandly about body image. In her poem “Barbie Doll” she has a strong theme of feminism. She also deals with the issue about the ‘ideal’ female body type. Majority of her poems are written in free verse (verse having irregular meter, or rhythm that is not metrical), and her poems are often parable (short narratives with a moral).

Mornings were chilly, frost on windows

to stand over the hot air registers

the warmth blowing up my skirts.

But the basement scared me at night.

etching a starry-skied dream. I liked to stand under

the moon of lost souls, the vastness of the night leaving sinful

whispers in the wind. Yet the basement scared me no more.

I admit that I’m not the biggest fanatic of poetry. I do appreciate the art, and hope to one day be able to write decent poetry. Despite my former thoughts and opinions, Marge Piercy impacted me greatly. I found a new sense of creativity and appreciation with her work. It genuinely voices her honest and raw emotions. It’s powerful: her art of poetry. Dedicating a whole seminar to her life-story has made myself more motivated than ever to tackle poetry head-on.